This time I participated in the SEC-T CTF event and it was pretty fun! I played with a group of people from my university and we managed to get quite some points. But I didn't manage to solve some of the challenges on time. However this didn't stop from trying to solve them once the event was over!

One of the challenges I was hooked on was called Confusion. The reason why was because it seemed like an "easy" challenge but for some reason I couldn't figure it out! The challenge began by downloading the following image:

I ran binwalk on the file and got the following results:

Alright, it looks like we got some hidden files within the image. I ran strings as well and found some interesting stuff:

According to google, Phil Katz is the co-creator of the Zip file format, which got me thinking that there has to be an embedded .zip file containing something called 1337. Easy peasy!

I went to Wikipedia to lookup the magic number used for the zip format. Turns out it can be one of the following:

I loaded the image file in my HEX editor (Hex Fiend) and begun searching for these magic numbers. I found 1 occurrences of PK which was followed by 1337. Looks like I cracked the case....or not. I tried copying different parts of the data after the first occurrence of PK to a new file but no joy. 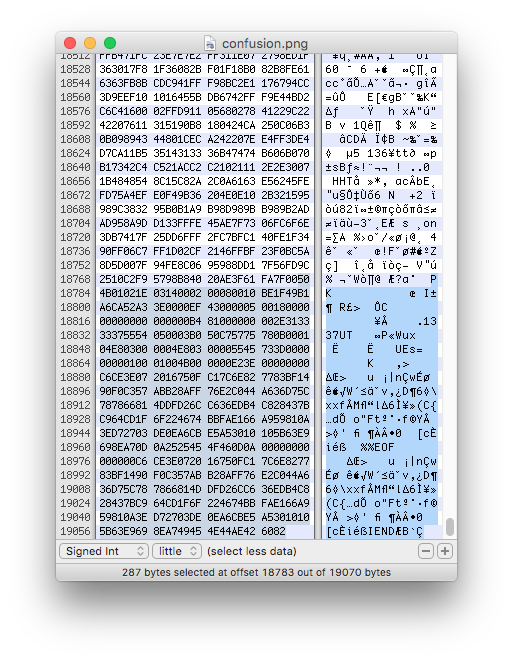 I was stuck at this point and begun researching more about zip files and found these two resources, 1 and 2. I learned quite a lot about the structure of .zip files. According to 1 the .zip file should begin with PK and end with Pk. However I couldn't find any other Pk so obviously I was missing something. I even tried inserting the correct trailer but that didn't work as well.

I tried to copy the data between the first occurrence of PK and UEs= (PK) but that didn't work either. My next idea was to search for more occurrences of UEs= and lo and behold, I found one. 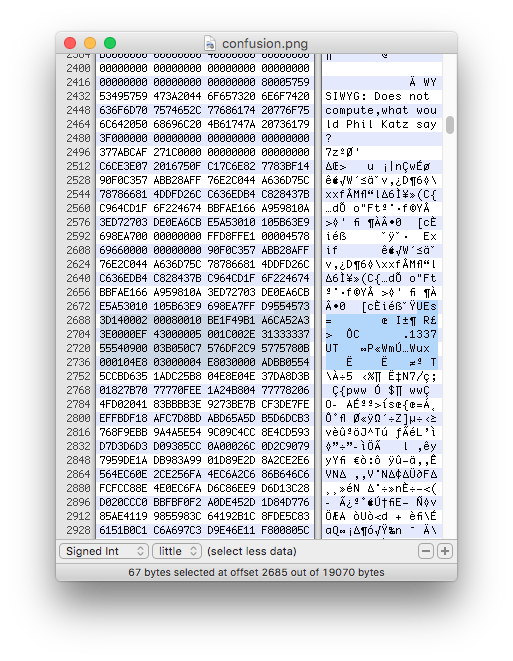 I decoded the second UEs= found and copied the data between that one and the first PK because according to 1, the .zip file should start with PK and end with Pk. I created a new file with the copied data, saved as file.zip and tried to unzip but no joy! I knew I had to be on the correct path so I continued working with the HEX values for quite some time but I couldn't unzip the file without errors. I started to google how to recover corrupted zip files and found this command:

I ran the command and it successfully recovered the .zip file and dropped a .pdf file containing the following text:

I copied the text into my URL bar and BAM, the flag was: sect{I_4m_n0t_3ncrypt3d}

SEC-T CTF was fun and I will most definitely play again in the future. I was a little bit disappointed that I couldn't solve this challenge in time, but hey, next time there won't be any .zip files that can hide from me ;)